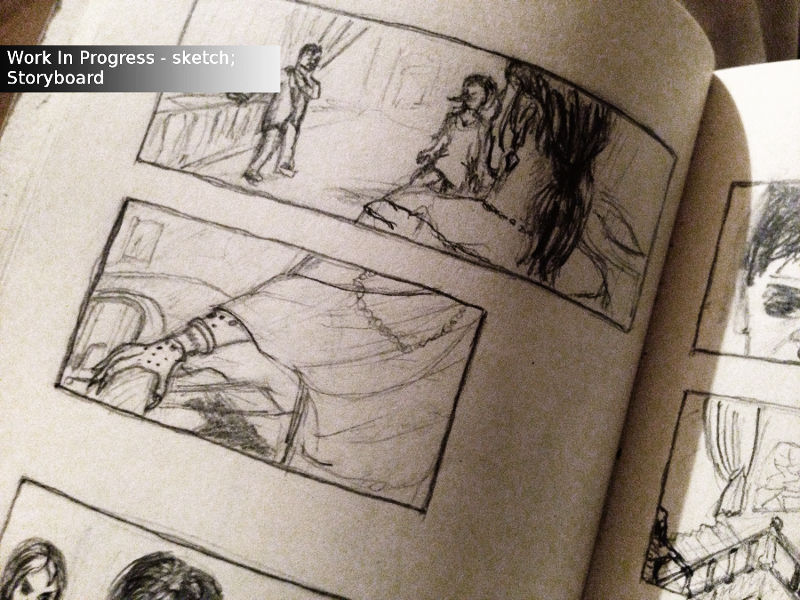 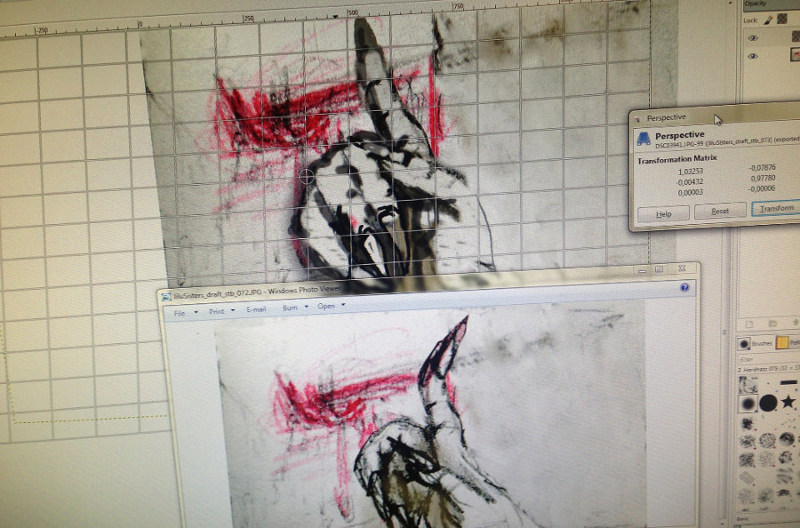 (Upper - look into storyboard sketchbook; below - two animation frames for one scene)

Soon there will be new section under 3D-Animations where i will introduce readers with more insights into this long-dreamed project of beautiful blend between music and dark art. With idea being born close to 5 years ago in my head and staying with me ever since, marking its more special place among all the rest, i finally succeeded in giving it some proper life and development during last year and a half. There is something to be shown.

Story revolves around a prey - man who is lost and found trapped in a luxury mansion with four beautiful adorable vampire sisters playing with him cats & mouses. It explores the power of fear, aggression, instincts for survival, face of finesse, tragedy of illnesses, and a place for the empathy...

Overview of some of recently published video works

14 Oct, 2015, No comments
Here I summarize few short video works that I made. Sometimes my mind screams to create something, be it very very short. It is unbearable to creative mind be dragged into long, exhausting personal creative project which might take years to fully develop alone during free time like short animated cartoon or comic book or whatever.

Video that was made on anniversary of September 11th this year.

Next was a short introductory teaser video for my wall-painting "Zombada" which was a 4meters on 3meters painting done some time ago. It shows in a digital format what this painting is all about.

And "Defense Line" was one of my another experimental video work where we explore some hassle on the beach.

Thanks to those who watches. And press like on Youtube if you like any of those works or write in comments if you hate them so much that they suck and are beyond the critics. I will sit down for a moment and think about your reply. 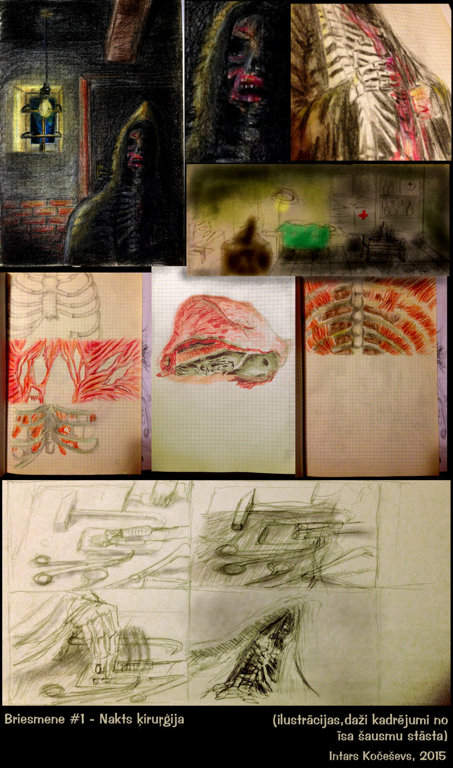 I was lucky to acquire some old and nicely pictured human anatomy book year ago. Medical drawings made by artists before digital art was available to anyone has it's peculiar look and style. And after reading recently some of my most favorite writer, Howard Phillips Lovecraft's bio and inspired by his short stories, I decidedly choose to give it a try in creating some very short horror story. Goal is to create a work that looks like hilarious horror-movie trash with no pretensions to originality or novelty in a genre.

It is about one dead man, a surgeon himself, who in a pursuit of conspired effort to change his identity completely with a task to make his prior life 'invincible' for far reaching goals, after research of his life in reanimating dead tissue undergoes risky experiment for making himself dead and buried (by tradition of relatives), only to rise from the grave and have very little time left for possibly successful yet extremely experimental surgical procedure, designed by himself prior his planned death.

Plan is to make enough colored-pencil drawings to tell such a story in a video of still images with added sound and music. I will look for very minimal digital retouching in this work to make sure it looks like trash.

And during work on this subject, for a time being I had one supporter. Cat was taken from street, found to be abandoned and with some illnesses. Little did I know that once his eyes were cured and he started to see better, he was about to show his true nature which, I must say, sometimes was really mysterious and downright puzzled me. He became some kind of observer... And especially while I did some work on this project. 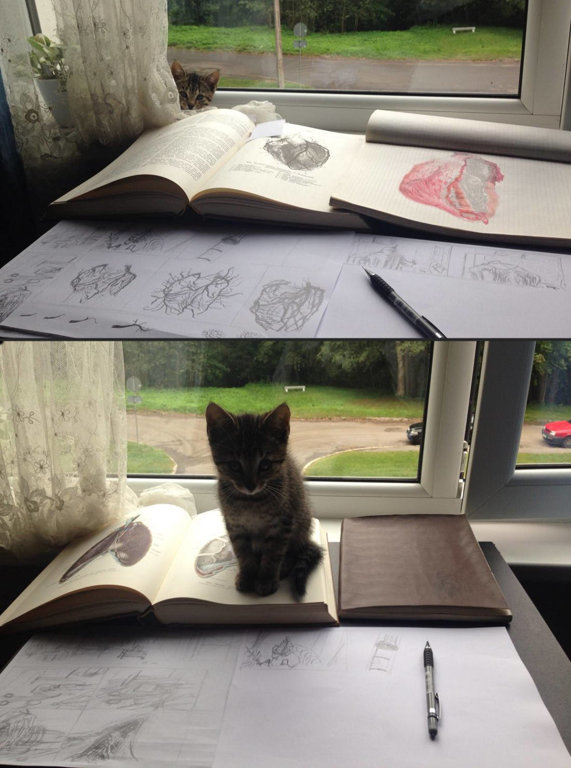 Since mentioning the great Master of Horror/Supernatural literature, H.P.Lovecraft, here is a documentary made quite recently. The documentary has appearances by some of the more influential horror writers and movie directors of the 21st century, giving their input and adding to the story.

25 Aug, 2015, No comments
Now there is a new sub-section, dedicated solely to project of my mystique 3D-animated short film "Room of Mr.Osvald". There I will collect in a more centralized manner all materials related to development and progress of this project. So anyone interested particularly in this work may follow it from there and see everything in one place to get better overview and feel of this short film's look.

There is now categories when you scroll mouse over "3D Animation"

In a similar fashion I will seek in foreseeable future to organize this web and viewers experience in relation to my artistic and more development-heavy 3d projects. It is done with aim to make it possible for viewers (and myself as well) to see and make oneself familiar with each one project on individual, unique level and encompassing, organized manner. Stay tuned for other posts.

On news section posts related to such projects will be made by me as well so it is up to reader/viewer how he chooses to see things. There is also similar page on Facebook to those who prefer getting info through Facebook. You can subscribe to get automatically news whenever they are posted. Have a look.

"Room of Mister Osvald" is my personal short horror/supernatural animated film dedicated to and inspired from a literature legacy of great writer H.P.Lovecraft. It is planned as 3-4min long (approx.) and it explores various geographic places at different time eras and their interrelationships.. 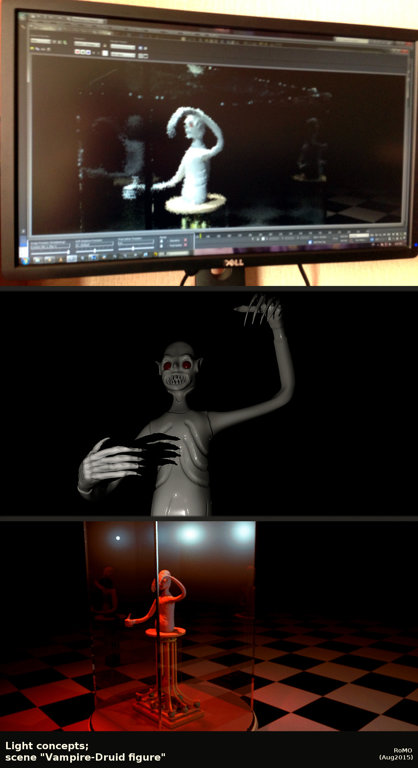 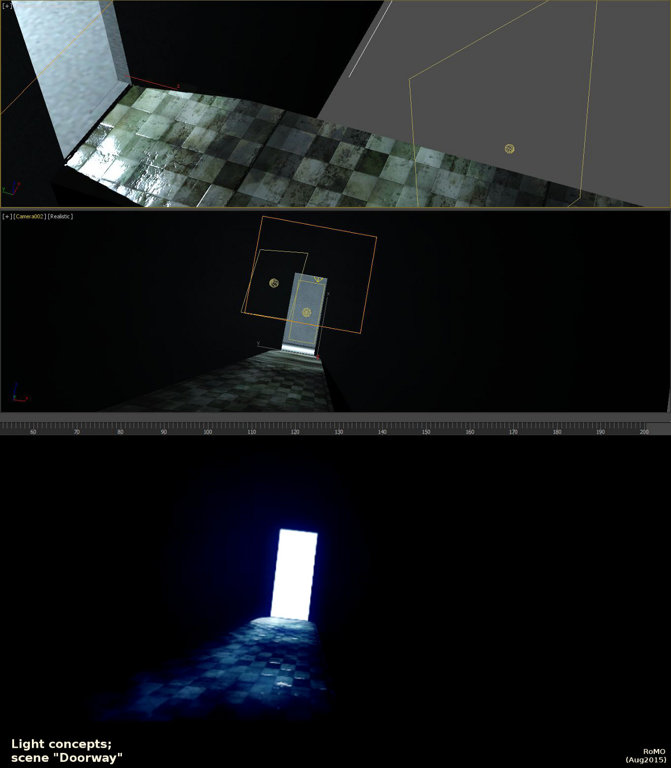 "Room of Mr.Osvald" is approx. 50% complete in its animated form as of now. In close future I will be releasing preview videos and trailers. That's it for now folks, stay tuned for more. And thanks for viewing and visiting, whoever you are - statistics show that there is quite of you from all around the globe who happens to visit here 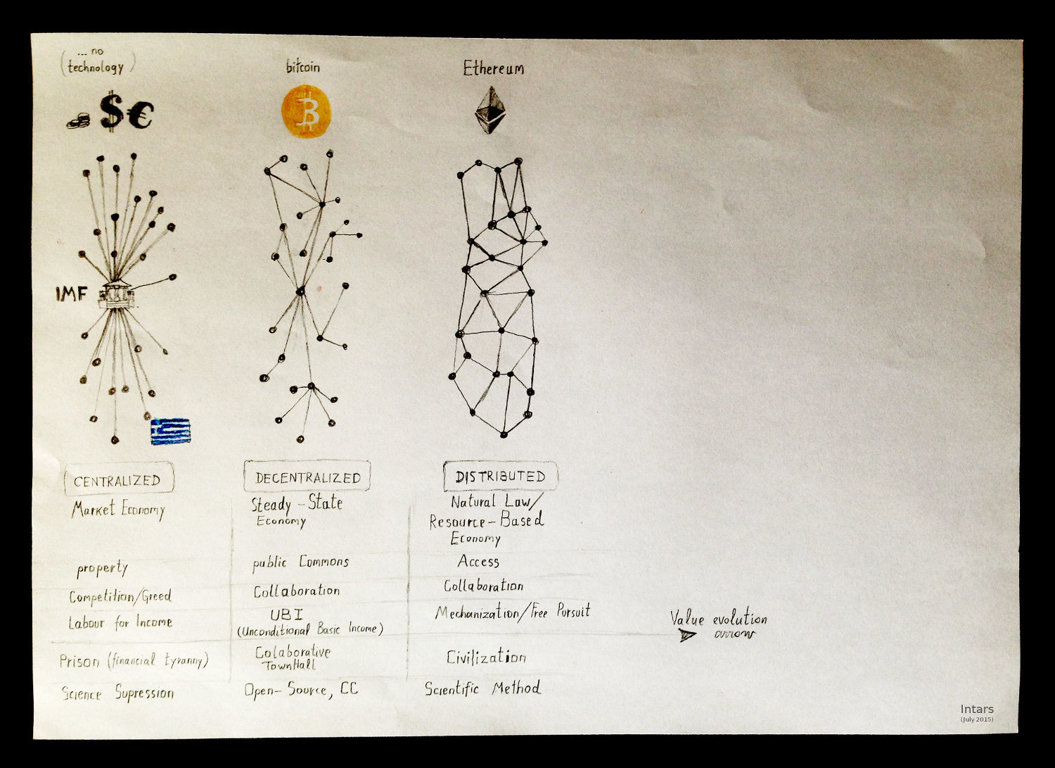 9 Jul, 2015, No comments
I was for quite long enough time hesitating to give it a try to some game engines to create some 3d cinematics in real-time rendering environment. First encountered Unity on one specific project during my commercial employment and while working on internal mobile game project.

Being following through cool tutorials from 3DBuzz - friendly, great company providing various professional tutorials on gamedev, 3D modeling, animation. On their website they have very detailed "Unity Fundamentals" course which is free.  http://www.3dbuzz.com/

Screen capture from my scene

5 Jun, 2015, No comments
After battle with the brushes, third component of this multi-project is accomplished. Coming its way from digital dimension this work now made its way into tangible, physical dimension. "Defense Line" looks into story of ongoing struggle in a world of animal kingdom. 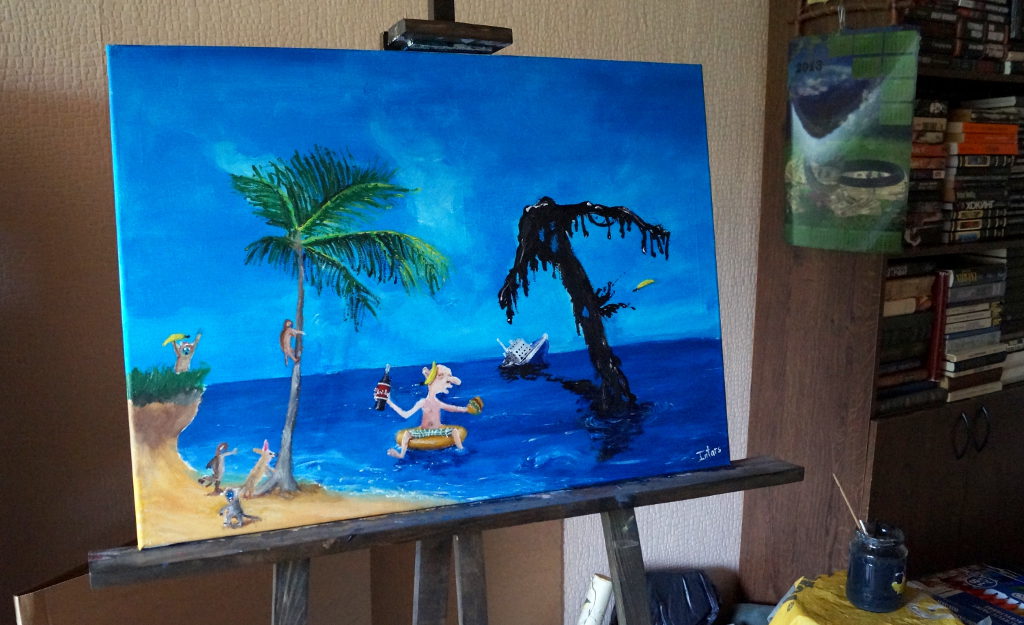 A close-up of this black, liquid dude 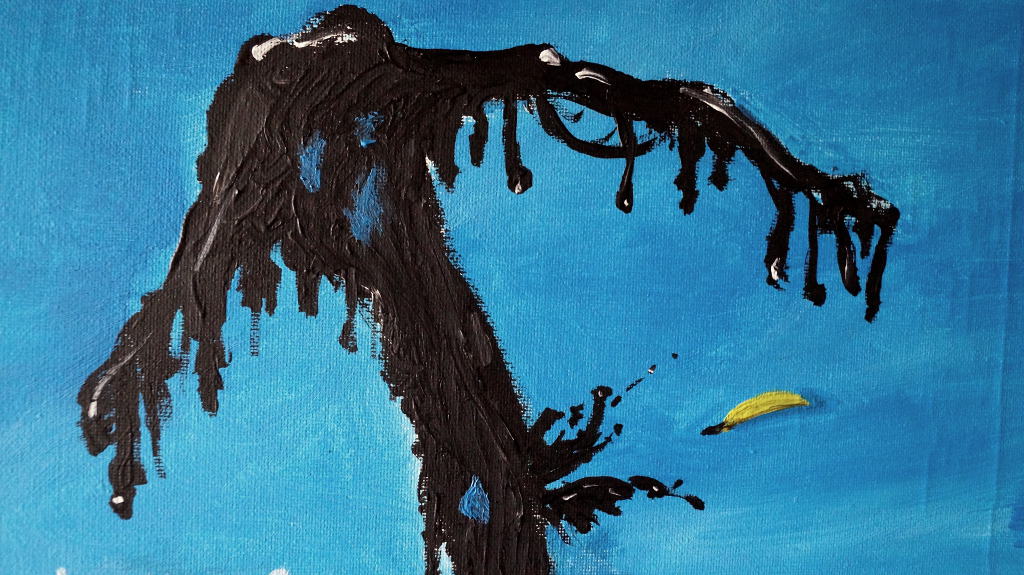 With this accomplishment this story is left on its own life from now own. The painting itself for the very first time in my painting practice is left to seek its new owner whoever and if such persons happen to be and come across. It is available for purchase. But since I will miss it to some degree and would like to keep as long as I can, painting has its price.

If any reader, internet folk feels sympathetic to this particular work or any further of my paintings with some socially critical, thought provoking motif in it, purchase may provide additional (but not mandatory) yet still meaningful help and support in my efforts for further explorations of socially-conscious,imaginative ideas and other artistic insights.

Price is 95 euro (with shipping)

12 May, 2015, No comments
"Defense Line" is a story about ongoing ignorance and value disorder in an animal kingdom where one specific species imagined themselves being the most important part of that kingdom.Below is a finished version of this work. 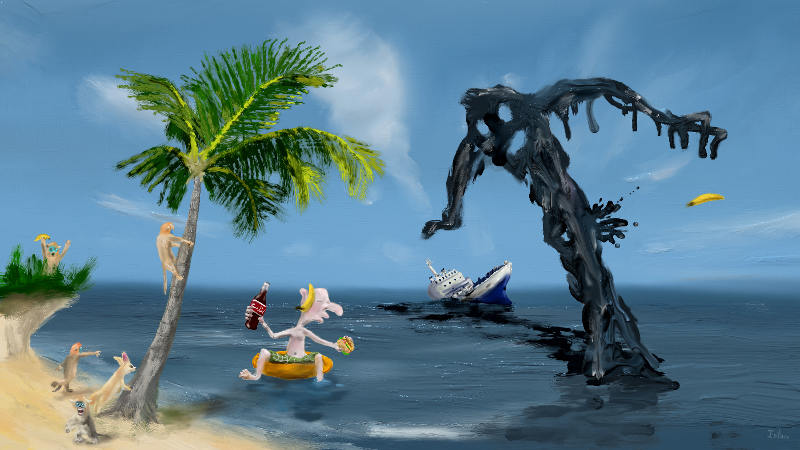 This project was started with multiple purposes in mind. One of them was to play around with a idea of creating some sort of a "motion-painting" - a slightly animated version of whole story by utilizing layer-based workflow  of the Verve software that was used to create digital painting in the first place.

There is also a real canvas painting in progress which depicts this dramatic struggle in animal kingdom. This physical, real one I intend to put on sell on internet once it is finished so if anyone around the world is interested in getting this for his/hers private collection, as a gift to art and cute animal lovers or for destroying it or whatever other reason - it will be waiting for its owner. 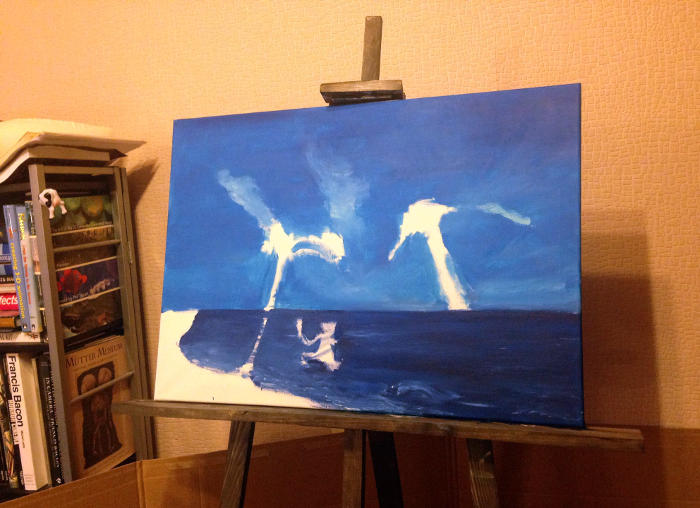 Digital version of this work is also released under Creative Commons license here on my DeviantArt profile. It may be freely used for anything be it commercial or non-commercial.

5 Apr, 2015, No comments
After finishing Nikolai Gogol's short story collections "Evenings on a Farm Near Dikanka" my sketchbook ended up with those additional drawings. An old Cossack playing cards with a devils, witches and pigs to save his life and horse from the dark ones.
That scene of a card play with a witches was epic and artistic depiction of a total cheating and deception.

My admiration to outstanding work of Ukrainian/Russian dramatist and short stories writer N.Gogol went beyond reading his books. He could be considered among one of the most innovative ones who brought a Horror/Supernatural genre elements into Russian literature in 1830-s.

Thinking of maybe turning those sketches into canvas paintings in some near possible future if my cash-flow won't bankrupt or I run out of spare from the job time.

Playing with an angle and views 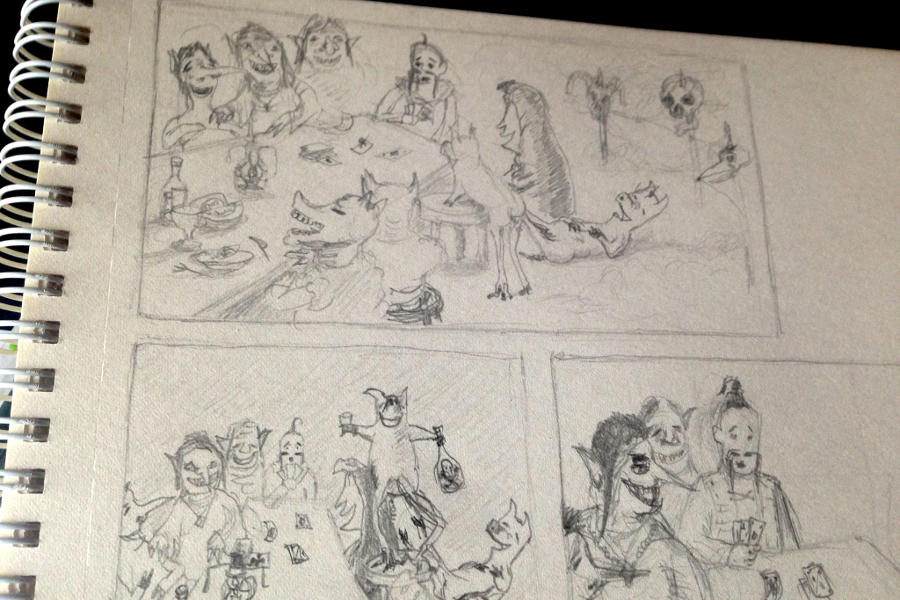 New digital painting in progress - some look into recent experiment

9 Mar, 2015, No comments
What started as a mere "warm up" before getting to previously and originally intended painting, quickly grew into what seems like a new painting itself. And a quite urgent one.

Experiment with some ways of creating sort of a painting-like images with a help of computer technologies and an open-source tool called Verve which is programmed by one reeealy talented CG artist and programmer - mister Taron.

Verve is what you could dream a painting soft to be. And now, here it is! Mister Taron didn't hide it behind closed gates. Lets help him to pay his taxes for that!

Two images from process showing inside of what is possibly going on in the image. Program allows to have this suuper-awesome grid perspective which is adjustable in many ways. 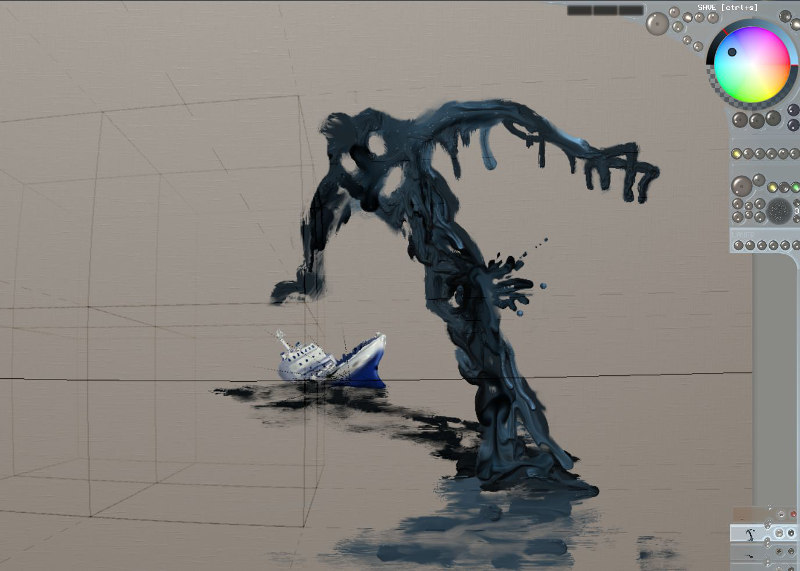 This dude got his own layer. 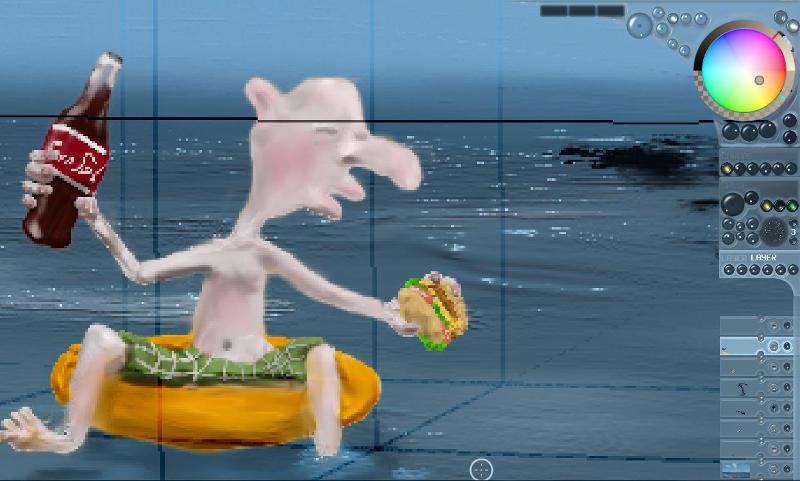 5 Mar, 2015, No comments
Finally, one of the first concept art scenery illustrations are done for this drama story. This 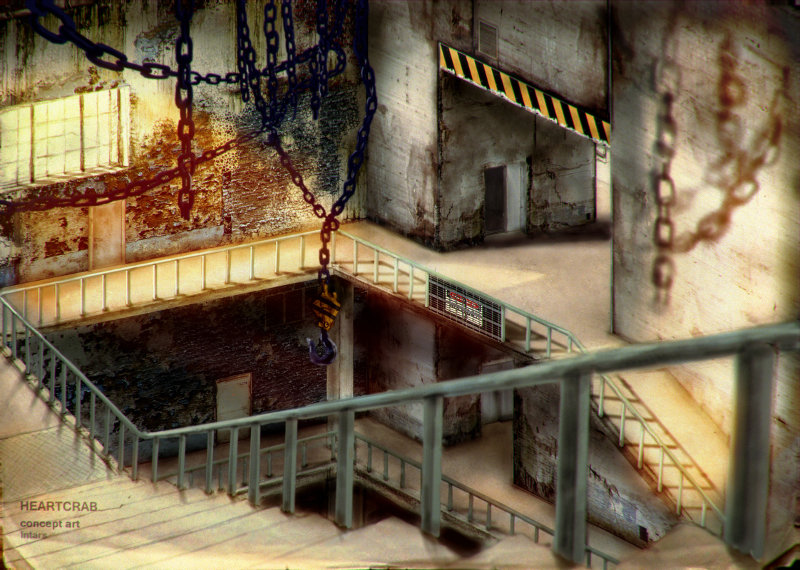 Below can be seen original pencil sketch 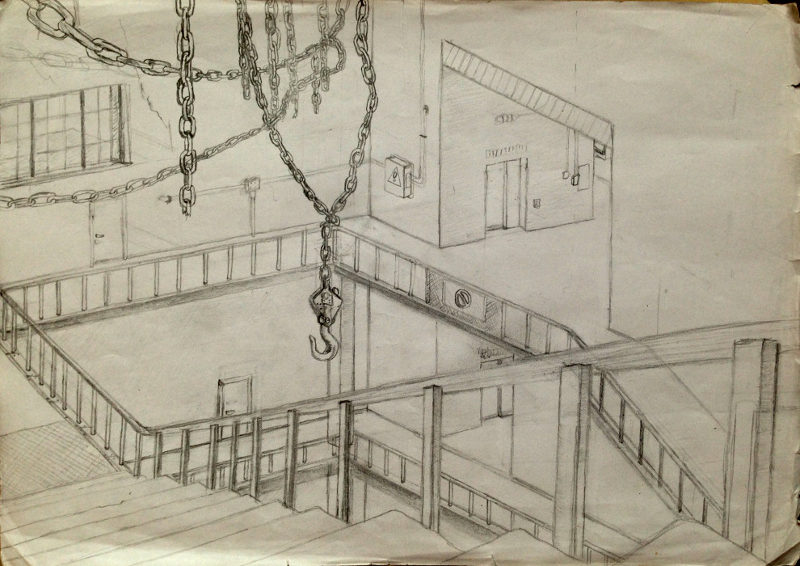 15 Feb, 2015, No comments
Doodling around one digital-pencil-retouch drawing. Factory in progress...A look at my personal working place. And I spotted only after the photograph that I even have a pyramid which I somehow didn't noticed how it got there on desk. I am not of a believers into Magical Spiritual Pyramid Energies so I didn't put it there..

Work in Progress illustration for a project "Heartcrab". 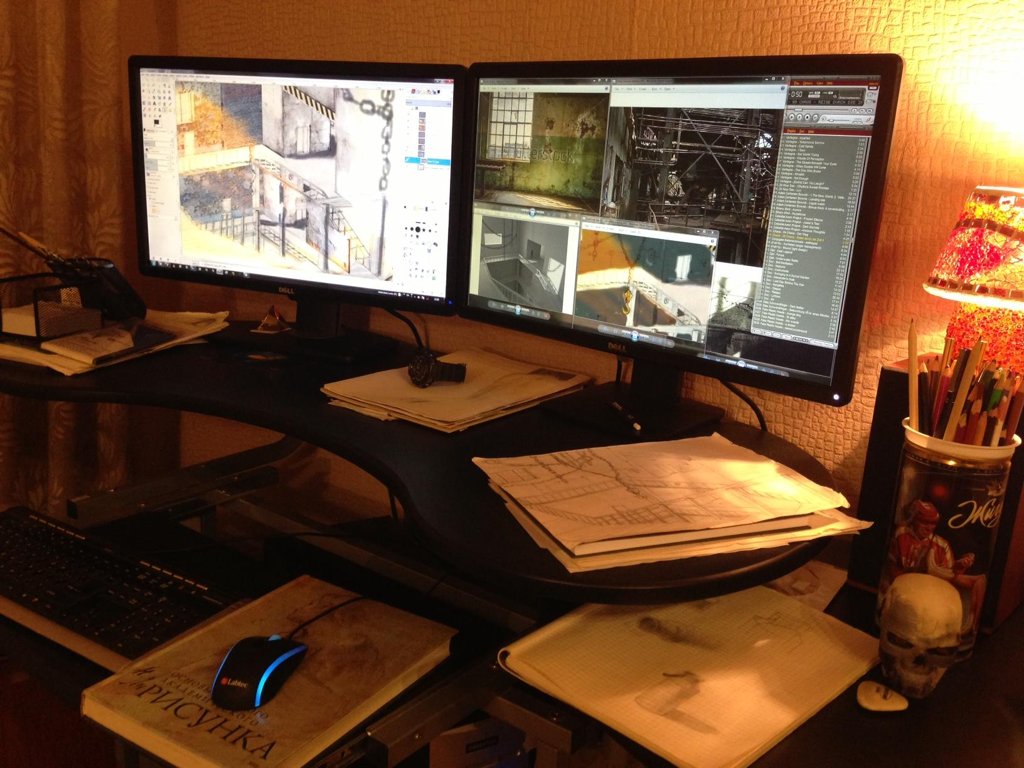 Use of 3D graphics for lighting & shadow preview. This factory's scene (as imagined in original story-idea) is one of the crucial and symbolic scenes among some others and this illustration is a depiction if this place.

28 Sep, 2014, No comments
This is how far I managed to get so far in this comprehensive Maya learning course provided by 3DBuzz team.

I have the alienzzzz guy in his dome-shippy - everything shaded. 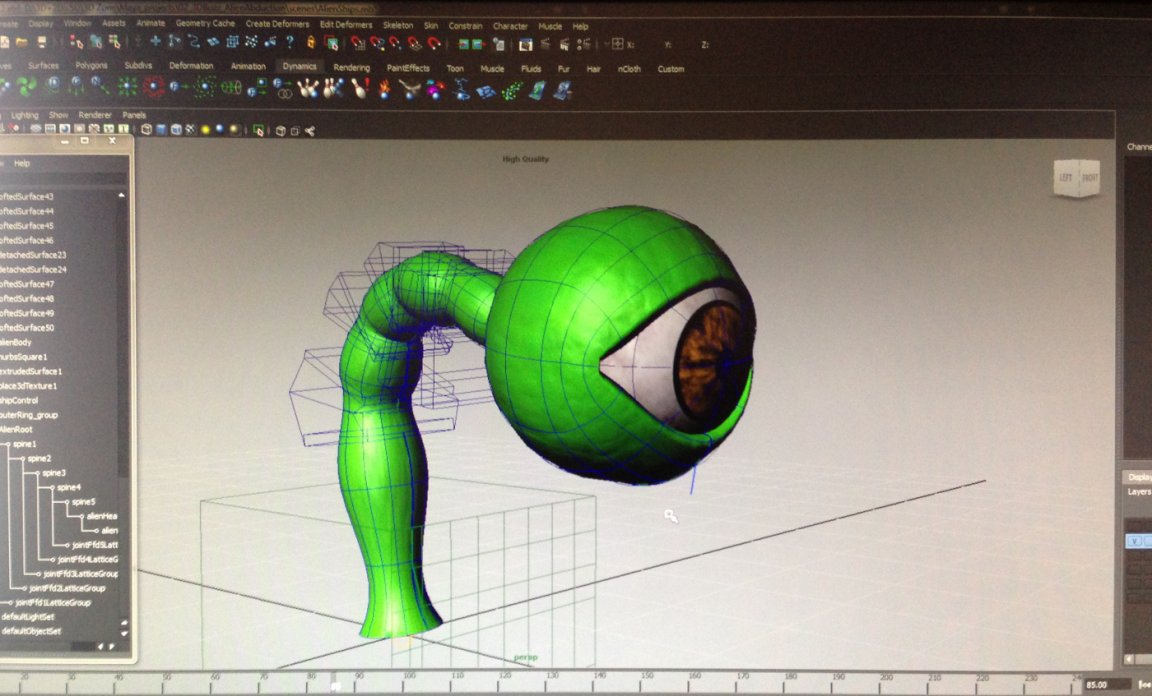 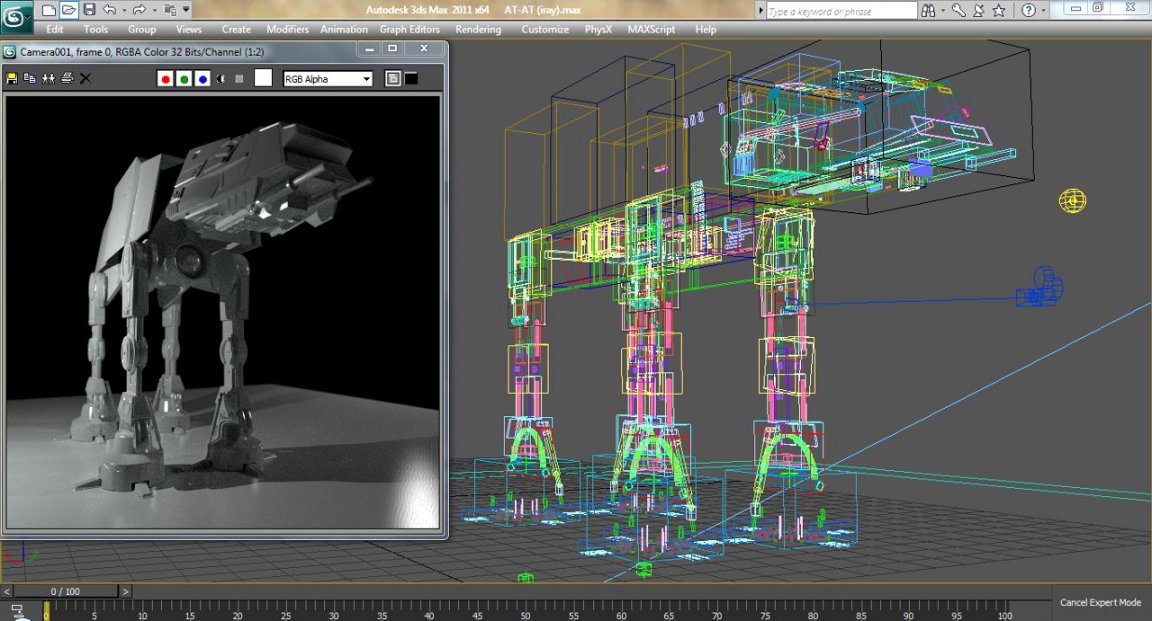 WIP - Work In Progress image of my efforts to model this beast by following tutorial series from 3DBuzz learning website.